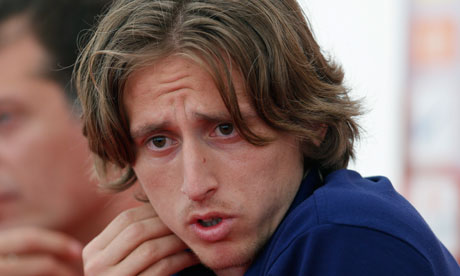 According to morning reports Spanish champions Real Madrid have agreed a deal to sign Tottenham playmaker Luka Modric for a fee in the region of £23.6million plus add-ons of £3.9million.

The midfielder is currently frozen out of the Tottenham first team picture after expressing his wish to leave.

Luka Modric is very much the brains of the Tottenham midfield and will be badly missed in the centre of the park. The 26 year-old is very clever on the ball and has the sort of vision that distinguishes him from a lot of his midfield peers.

If he completes his move to the Bernabeu then his absence will create a major hole in the Spurs midfield. However, I’m sure Tottenham boss Andre Villas-Boas has a replacement in mind for the Croatian international.

Tottenham have already completed the signing of attacking midfielder Gylfi Sigurdsson this summer, but he is a completely different sort of player to Modric. Tottenham have been heavily linked with Porto’s Portuguese playmaker Joao Moutinho this summer.

Maybe now that the Modric deal looks close to completion Villas Boas will make a move for the talented midfielder. The 25 year-old wouldn’t be a bad replacement for Modric. As he showed for Portugal at Euro 2012, he is very capable of grabbing a game by the scruff of the neck with his skills.

I really fear for Modric’s career if he moves to Real Madrid. I think I have talked about this issue before and stated that I didn’t think Modric should move to the Bernabeu. Obviously a move to such a big club would be hard to turn down.

However, Luka Modric is going to find it hard to command a regular starting place in Real’s excellent central midfield area. Should the deal be completed as expected, then I believe that Modric could be wasting his talent sitting in the Bernabeu dugout on the Real bench, and that’s no good for anybody, least of all the player himself.