Is Brazilian playmaker Willian about to move on? 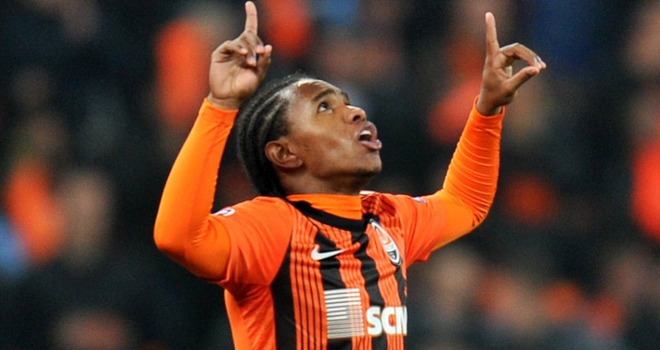 Brazilian playmaker Willian of Shakhtar Donetsk is being linked with a move to a major European league.

The 24 year-old has been impressive for the Ukrainian champions in recent seasons and scored twice in the clubs 3-2 defeat at Premier League Chelsea in the Champions League.

Willian has been linked with moves to the Premier League with Chelsea and Tottenham in the past. The Blues are unlikely to come back in for the mercurial star, with the club well stocked in the creative midfield area.

Tottenham boss Andre Villas-Boas is known admirer of the midfielder and was looking for a midfield replacement for Luka Modric prior to the summer transfer window shutting. Spurs failed in a late bid to sign Porto star Joao Moutinho and could see Willian as an ideal alternative.

The midfielder has big ambitions and has never hidden his desire to play in a big European league. He said after the Chelsea match: “One day I want to play for a big club here (England), in Spain or in Italy. I have said that in the past.

“I always try and play to the very best of my ability, not just in some games. But it is obviously important to do as well as you can against a team as good as Chelsea. In the past, Chelsea and Spurs have made offers and in the future, who knows? Maybe they will come back.”

Willian had also previously been linked with a move to Italian champions Juventus. He would definitely be a good addition to Antonio Conte’s squad, but I think the Bianconeri’s main priority in the next transfer window is securing the services of a striker.

It’s unknown which league Willian will move to, but whatever league he ends up in will be more exciting for the presence of the mercurial Brazilian midfielder.