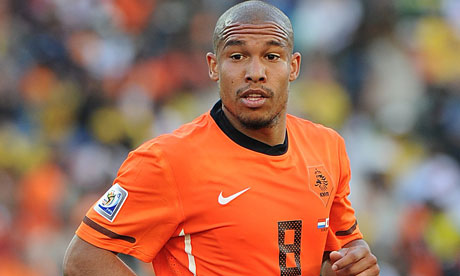 AC Milan are still very active in the transfer market on the lookout for any opportunity that may arise to strengthen their squad. It has been reported that they interested in signing Dutch international from English Champions Manchester City. The Manchester side is keen to offload De Jong as they already have plenty of midfield options. It seems that Manchester City are ready to let him go on the cheap as they are only asking 8 million euros for De Jong. AC Milan have presented an initial offer of 4 million euros for the Dutch international. It seems very likely that both teams will reach an agreement halfway for a fee of around 6 million euros.

Nigel De Jong started his professional at Ajax before moving on Germany to play for Hamburger SV. In 2009 he moved on to Manchester City. De Jong is also a Netherlands international as he represented his country 63 times and scored a goal.