Celtic progress, as holders go out of the Champions League 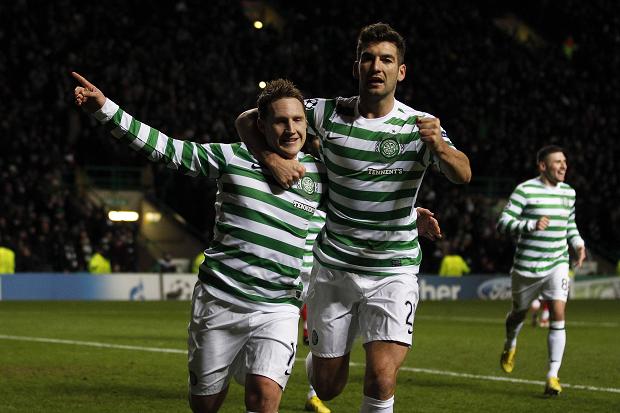 The European glory nights have been brought back to Celtic this season.

The Hoops European adventure continues after Neil Lennon’s side defeated Spartak Moscow 2-1 at Celtic Park to progress into the last 16 of the Champions League.

Striker Gary Hooper sent the home fans into raptures in the first half with a well-struck effort that flew into the Spartak goal.

The game was a tight affair and just before half-time the visitors equalised. Brazilian striker Ari escaped his markers to expertly chip the ball over Fraser Forster and into an empty net.

Celtic looked to be heading out of the competition until eight minutes from time. Greek striker Georgios Samaras was adjudged to have been brought down by Czech defender Marek Suchy in the penalty area.

Midfielder Kris Commons stepped up and fired the ball home off the underside of the cross bar. The goal sent the home side wild. Celtic were able to hold on, but there qualification was depended on Benfica not scoring at mighty Barcelona.

Benfica drew with Barca 0-0 at the Nou Camp, which meant that Celtic qualified for the knockout stages and Benfica will be playing Europa League football after Christmas.

Holders Chelsea endured a night of mixed emotions, as they became the first holders to be eliminated at the group stage. The Blues hammered Danish champions Nordsjaelland 6-1 at Stamford Bridge, but were knocked out courtesy of Juventus winning 1-0 at Shakhtar Donetsk, an Olexander Kucher own goal enough for victory for the Bianconeri.

Chelsea will now drop down into the Europa League, with Juventus qualifying as group winners and Shakhtar finishing as runners-up in the group.

What is a realistic target for Celtic in the Champions League?