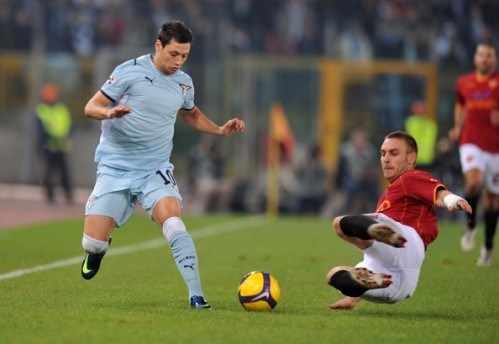 The derby Roma-Lazio is planned on Monday, April 8th. The situation is already difficult because between the two teams the relations are already full of tension and the qualification for Champions League is far away for both the teams.

Analyzing the current situation of Roma, the arrival of Andreazzoli, after Zeman, seemed have taken positivity and victo ries, but after the last match there are new uncertainties. The defeat 2-0 in Palermo has interrupted the good course of Roma: 4 victories and 1 draw. AC Milan has currently 10 points more Roma, and the possibility to reach Champions League seems more a dream than a real fact. Fundamental now is the victory against Lazio to improve the morale of the team, that will play also in Coppa Italia against Inter Milan, to play the final match of this competition. Roma could not count on Osvaldo and Piris, disqualified, while Destro should return on the bench after months of absence.

Differently, Lazio arrives from a victory against Catania, and is optimistic due to the return of Klose and Mauri, that will play this last phase of Serie A. In addition, Lazio, during this week, will play against Fenerbahce in Europe League, a match that could increase the tiredness of the players, but also their morale in case of victory. However, Lazio is still distant from a possible qualification in Champions League, as Roma.

There is still a week, but the tension in Rome has already reach high levels.