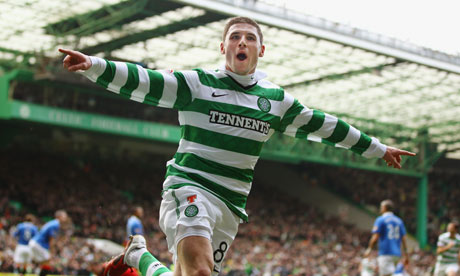 According to Sky Sports Italian giants Juventus are eyeing a move for Celtic striker Gary Hooper in January.

The 24 year-old year striker has been in contract negotiations about signing a new deal, but it appears that talks have stalled.

Gary Hooper has been a prolific scorer in the SPL since his move from Scunthorpe in 2010. The striker has a record of scoring more than a goal every other game in the Scottish top flight. Prior to moving to the Hoops he also had an outstanding scoring record for Scunthorpe, albeit at League One and Championship level.

Gary Hooper has yet to play at the top standard of domestic football. There are questions about whether he could perform at the highest level. However, Celtic’s Champions League adventure this season has gone some way to destroy that myth.

Hooper has shone in Europe’s elite competition this season and scored four goals in nine appearances. His performances in Europe have brought him to the attention of the Italian Champions.

The striker has already attracted the attention of Premier League clubs, with the likes of Liverpool, Newcastle and Southampton linked with a January move for the striker. Hooper’s price tag will surely be a big one.

Celtic won’t want to lose their top scorer and striker, especially as the Hoops are in the last 16 of the Champions League. It would take a major amount of money to replace his goals.

Hooper is a natural born goal scorer with tremendous movement and a composed finish. I’m sure he could play at a higher standard than the SPL. A move to Serie A with Juventus would be a very interesting prospect for the former-Southend forward and it looks like it could prove to a realistic option.

Would Gary Hooper be a good signing for Juventus?